We, the people of St. Joseph Parish, are called to express our Catholic identity

in joyful worship and in the responsible sharing of our gifts, as we reach

out to others in our community and grow in our faith, knowledge and love of God.

The Catholic community at Richmond was in the early days a part of St. Patrick parish, McHenry. In 1858, Father Andrew Eustace, the pastor at McHenry, was living for a time in Richmond, and he built a small church which served the congregation for forty years. 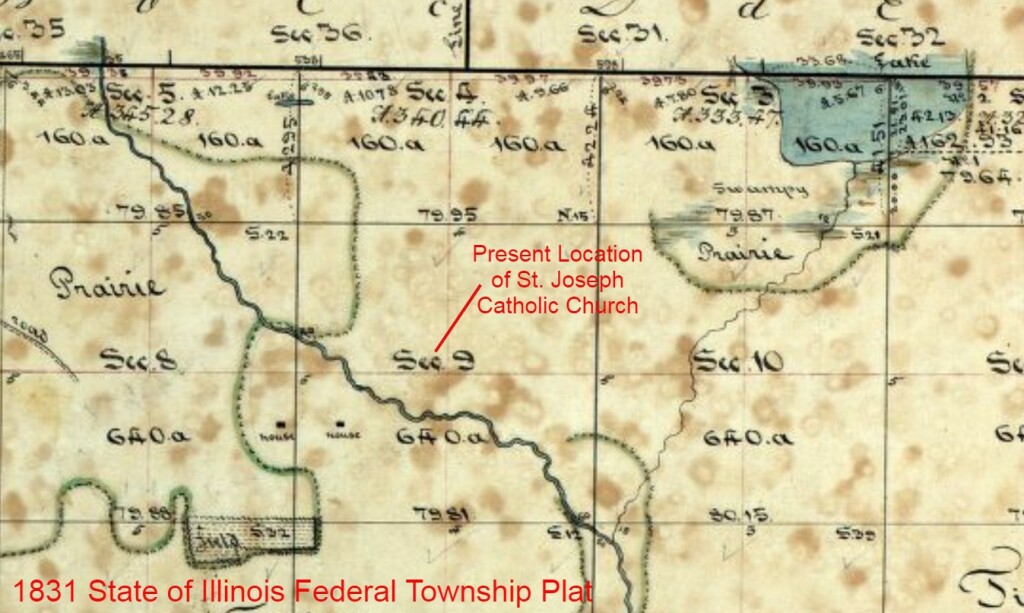 In 1899, a legacy, left by the Walsh family, enabled the congregation to build a new church, located across the road from the present (1967) parish cemetery. This church was dedicated November 26, 1899 and placed under the patronage of St. Joseph. Father M. J. McEvoy and the priests of St. Patrick, McHenry, administered to the needs of the mission congregation until the appointment of its first resident pastor in 1925. 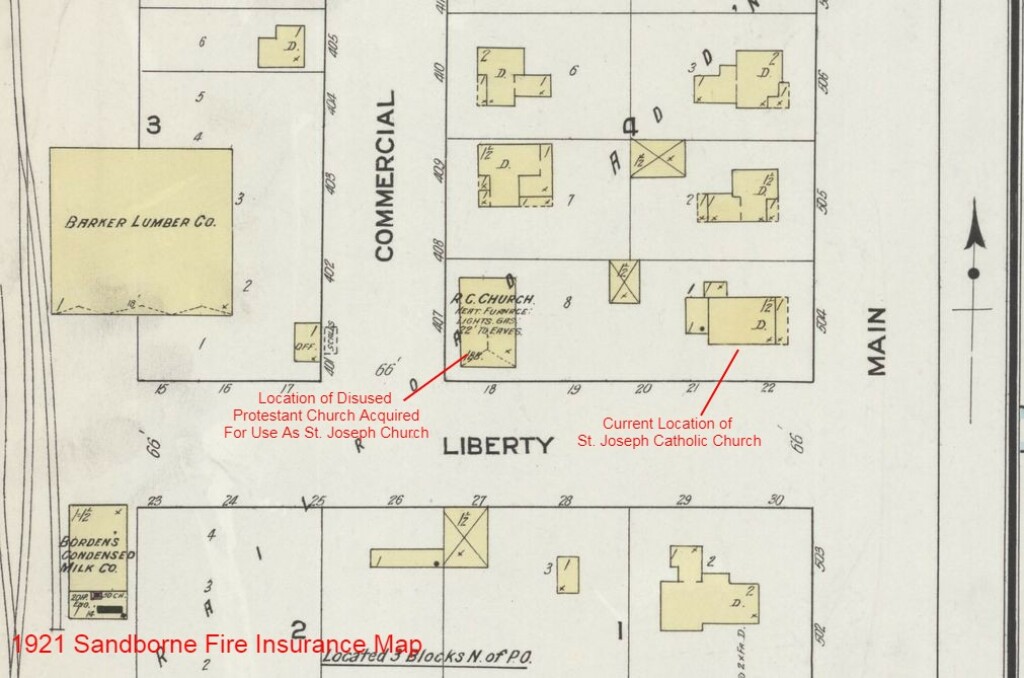 Father John Crotty served from 1930 to 1934. He was succeeded by Father John Blake, who acquired additional land and built a new rectory. By 1948, funds had been collected and plans drawn for a new church. The rectory was moved to its present site and construction on the new church was begun on the spot where the rectory had stood. The foundation was completed and some of the steel erected when Father Blake was killed in an automobile accident, July 29, 1948.

Father Francis Miller was appointed by Bishop Boylan on August 1, 1948. He continued his predecessor's work and completed the erection of the new church. By Christmas time it was possible to have the Midnight Mass in the new parish hall, The solemn dedication took place on May 30,1949. That same afternoon, Bishop Boylan administered the sacrament of Confirmation.

In February, 1955, the old church, which still stood to the rear of the new church, was torn down and construction was begun on a parochial school. Four classrooms were provided, a large playroom, washrooms, boiler and heating system. Provision was also made for constructing a convent at a future date, to be connected to the school. The cornerstone was blessed by Monsignor Charles Nix on May 15, 1955.

In 1956, Mother Corona of the School Sisters of St. Francis, Milwaukee, was able to send three sisters, and a suitable home, including a private chapel, was provided for them. Matt Freund was the other teacher.

For approximately 75 years, St. Joseph existed as a mission parish of St. Patrick’s in McHenry--in spite of the fact that near its beginning the small congregation in the northeast corner of McHenry County actually had a pastor in residence.

The "resident pastor" circumstance came about in 1858 when Father Andrew Eustace (1857-1859), Pastor of St. Patrick in McHenry, moved his residence from McHenry to Richmond after he built a small log church in Richmond.  Richmond was still in its mission status, but he chose to live there.  He was the only pastor to do so until the Richmond congregation became a parish and received its first official resident pastor in 1925.

The church that Father Eustace had constructed served Richmond area Catholics for just over 40 years.  A donation left to the parish by the Walsh family enabled its members to construct a new church in 1899.  The frame b

uilding, located north of town across Twin Lakes Road and a bit north of the present cemetery, was dedicated on November 26, 1899, and renamed in honor of St. Joseph.

When Father Karl Ostenkoetter (1925-1930) became St. Joseph’s first resident pastor, the parish attained independent status.  During his pastorate, the church built in 1899 was sold and Father Ostenkoetter arranged for the pruchase of an unused Protestant church, which was renovated for use as St. Joseph’s third church.  The building was located a half block west of U.S. Highway 12 and a block south of Illinois 173, which later became the site of the parish school.

At the time of Father John Blake (1934-1948) became pastor, Bishop Edward Hoban attached Hebron Township, formerly part of Hartland, to the Richmond parish.  With this growth of the parish, it became necessary to build a new church. Father Blake supervised the construction of the present rectory and helped draw plans for a new church.  The rectory was moved to its present site, just north of the new church on U.S. 12, and the church’s construction began in 1948.

Father Francis Miller (1948-1965) completed the building of the church.  A new parish hall was available for Midnight Mass by Christmas of 1948, and the dedication of the new church building took place on May 30, 1949, with Bishop John Boylan.

St. Joseph Parish celebrated its 50th anniversary as a paris 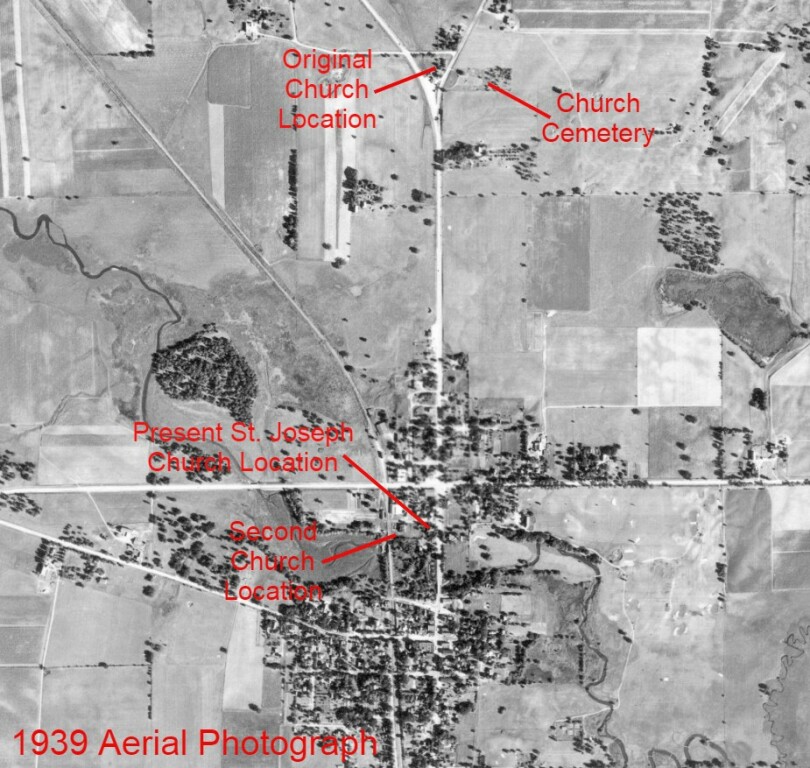 In 1995, during the pastorate of Father Joseph Kaiser (1991-2004), a new parish office and religious education office were built.

On March 19, 1999, the feast of St. Joseph, Bishop Thomas Doran celebrated a Mass of Thanksgiving to celebrate the parish’s 100 years of patronage under St. Joseph.

The parish has held a St. Joseph’s Day potluck for over 20 years.

In the summer of 2008 many members of the Confirmation Class led by Youth Director, Katie Jorgensen, journeyed to Rome along with adult chaperones including the pastor, Monsignor James McLoughlin (2007-2011).

In 2009 the interior church took on a beautiful new look with an extensive paint project which included stenciling on the ceiling and walls.  The tall pillars and trim on the exterior of the building were also repainted.

In 2010 the planning work began for the installation of a vertical lift for the church's entryway to enable handicapped and elderly to better access the three levels of the church:  sanctuary level, parking lot level, and the parish hall basement level.  A Silent Auction & Dinner fundraiser was held to support this project in April of 2011.

In July of 2011 we welcomed, Father Andrew Lewandowski CR as our pastor.

In the spring of 2012 the vertical lift was installed in the church's entryway.  Bishop David Malloy blessed our lift the following September.

In September 2012 parishioners joined Fr. Andrew for an 8-day Pilgrim Tour to Poland.  They visited the National Shrine of Our Lady of Czestochowa, Krakow, Auschwitz-Birkenau Camp, and Wadowice where Pope St. John Paul II was born.  They also toured the salt mines--one of the most unique places in the whole world, Gdansk where Lech Walesa started the solidarity movement, Warsaw, and Fr. Andrew's hometown of Chelmno--a beautiful 850 year-old city surrounded by a wall from the 12th century.

In July of 2014 we welcomed our new pastor, Msgr. Martin Heinz.  As our spiritual father, Msgr. Heinz has led us into a deeper understanding of our faith through his sermons, Bible Studies, and talks throughout the year.  We are challenged to live our life of faith and share our beliefs of the one true Church.

Facing the paralyzing effects of the Corona Virus pandemic in 2020, churches in the Rockford Diocese shut their doors. In response, St. Joseph underwent a technological transformation, adding wifi internet service to the church which enabled live-streaming of masses under the supervision of volunteers Edward Varga and Frank Brannon. The pair also supervised the installation of a low-power FM transmitter, allowing the sound system to be broadcast to worshipers participating in Mass from their cars in the Church Parking Lot. The resumption of Mass during the quarantine took place in August of 2020, when pastor Monsignor Heinz ordered windows removed from one of the old church school classrooms so he could say a Mass to those in the parking lot. To aid in spiritual closeness to the community, he also established a Park and Pray area with Holy Eucharist placed in a window overlooking the parking area for 24 hour adoration. Heinz also used the time in quarantine to repaint the church halls and renovate the bathroom facilities. 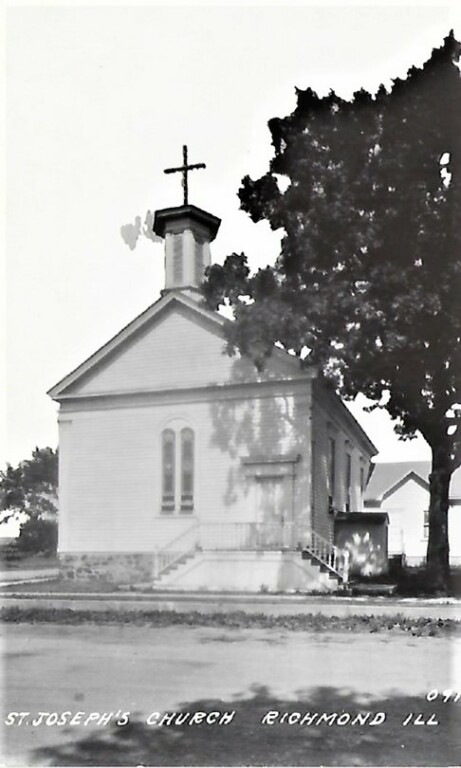 This is a post card depicting the former protestant church which would become St. Joseph Catholic Church, located at the corner of Liberty Street and Commercial Street. This site now contains the Church School addition. 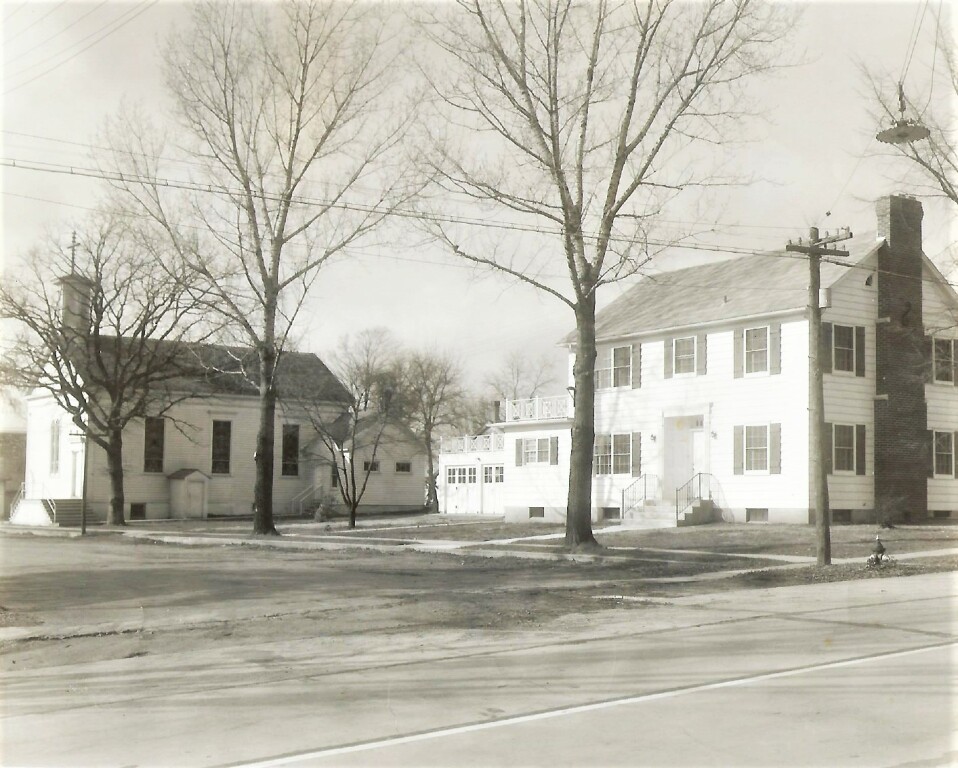 This photo was taken at the intersection of Liberty Street and Main Street and depicts the Church and Rectory, which is where the current church building is located. 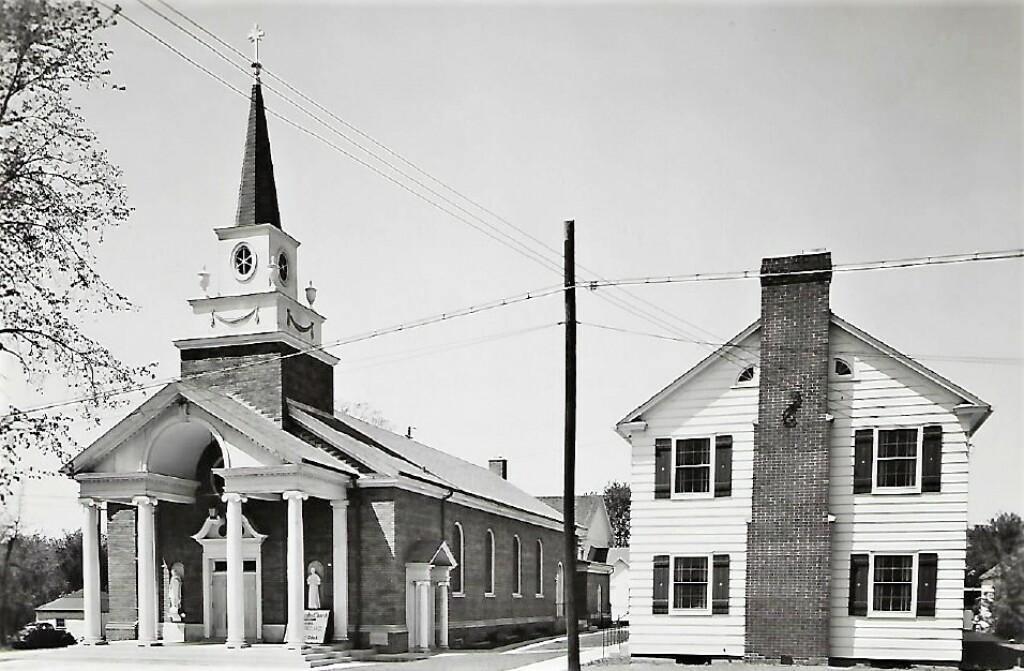 This photo was taken around 1949 and depicts the newly completed church building as well as the rectory which was relocated northward to make room for the church. In the background, the old church building can still be seen. It is unclear what the sign resting against the statue of Fr. John Bosco says, but it likely has something to do with the opening of the church. 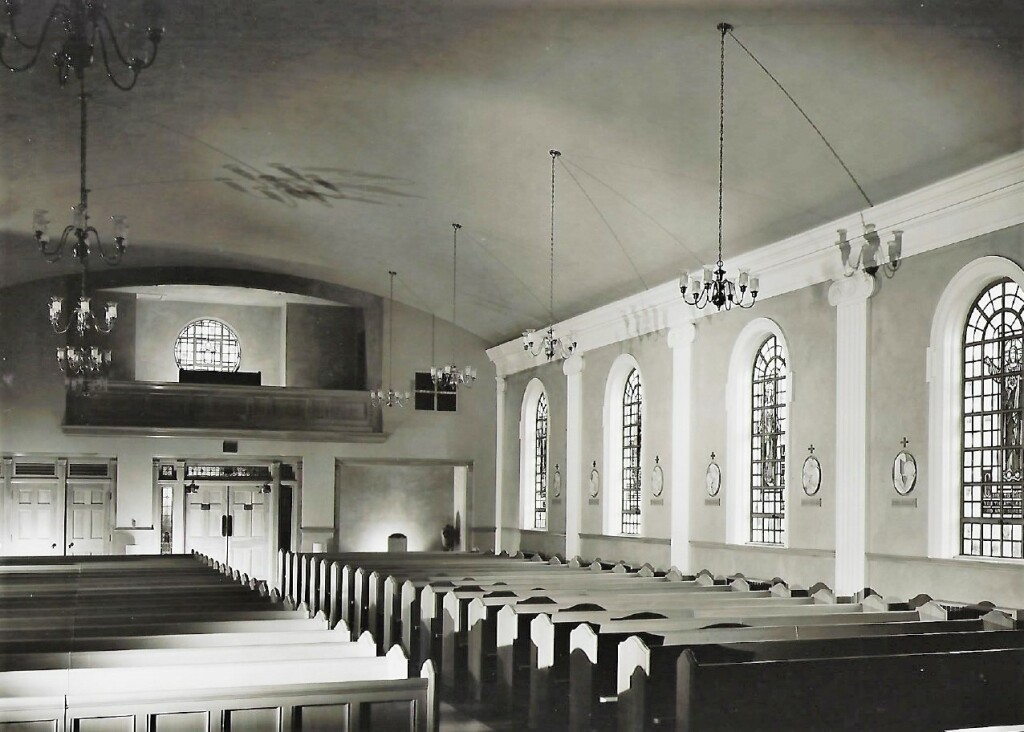 This photo is likely from the completion of the church building and depicts the confessional with three doors instead of the current two, and a baptismal alcove where the cry room is today. 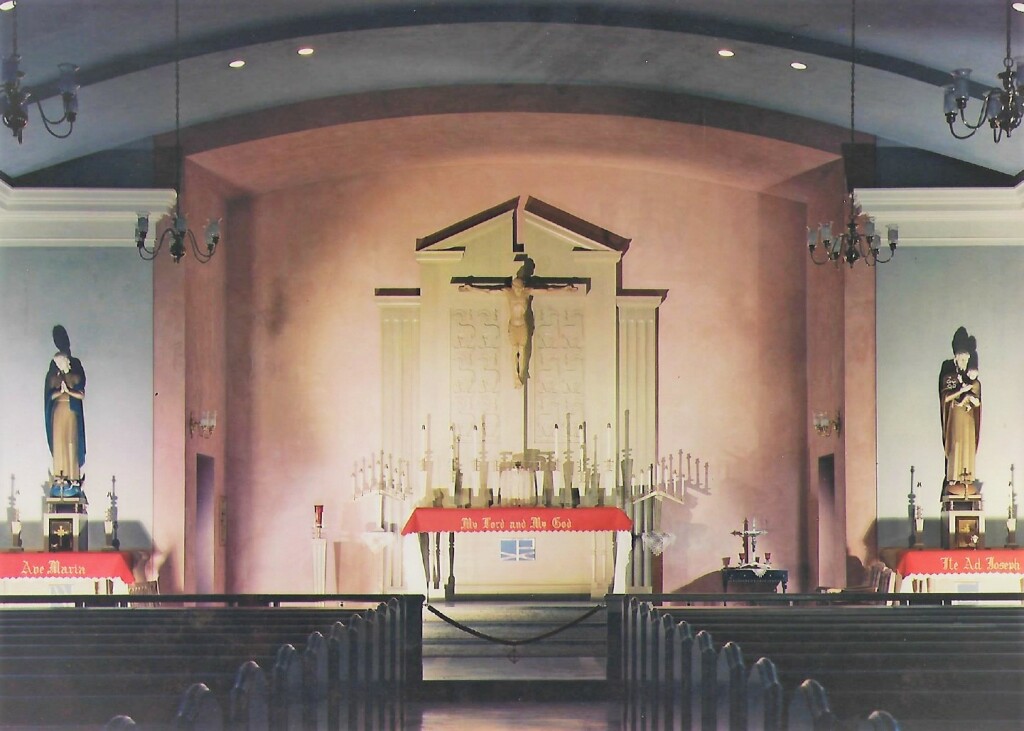 This is the only known color photo from the time of the church construction. Note the communion rail and velvet rope, as well as the lack of forward altar. The statues of Mary and Joseph have features painted in color. 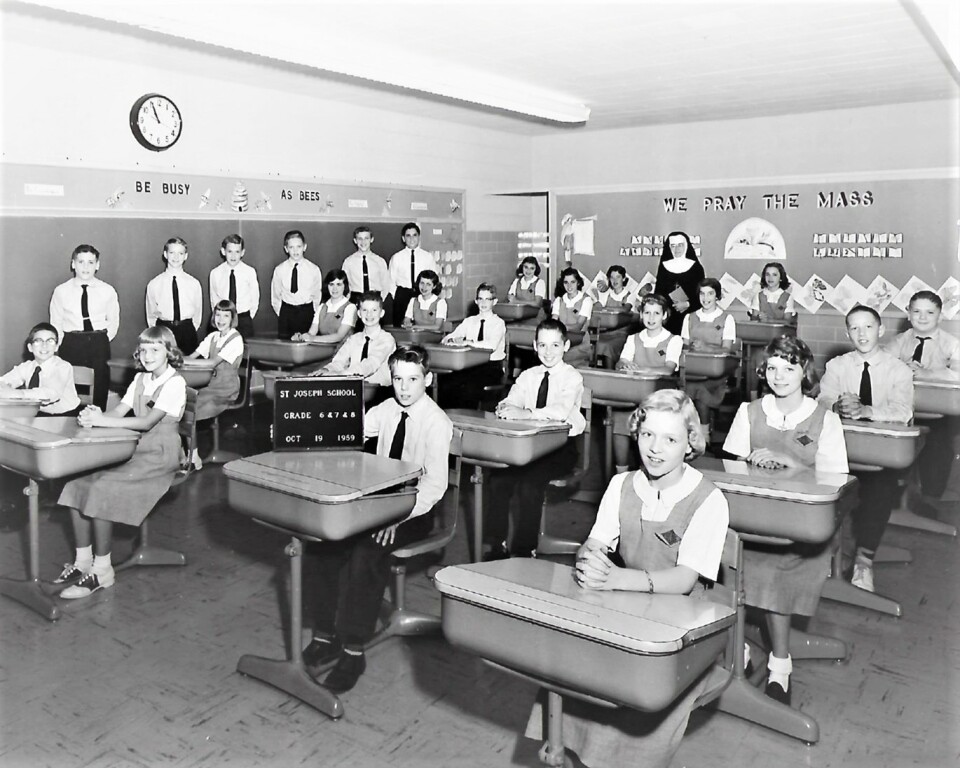 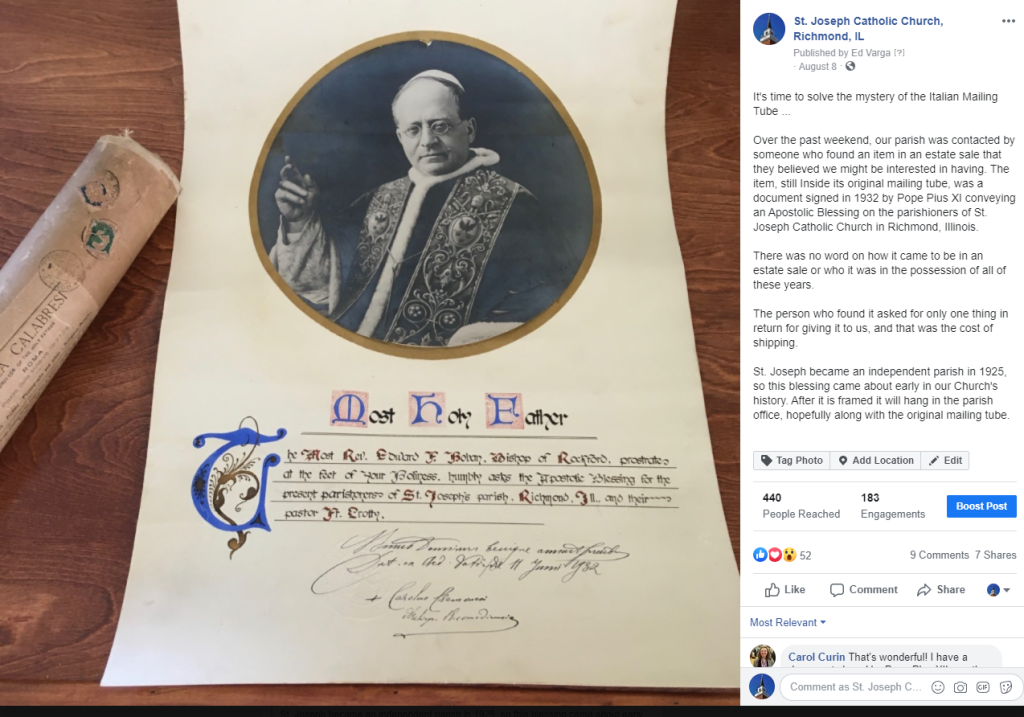 In 2020, the Parish Office was contacted by a woman in Texas who found a document she believed we might want back. It was a 1932 Papal Blessing to the people of St. Joseph Catholic Church from Pope Pius the XI. She found it in an estate sale. All she asked in return was the cost of postage, which along with the cost of framing it was provided by the Varga-Soule family. The image is a screenshot from the parish facebook page announcing its arrival. The document now hangs in the Parish Office. 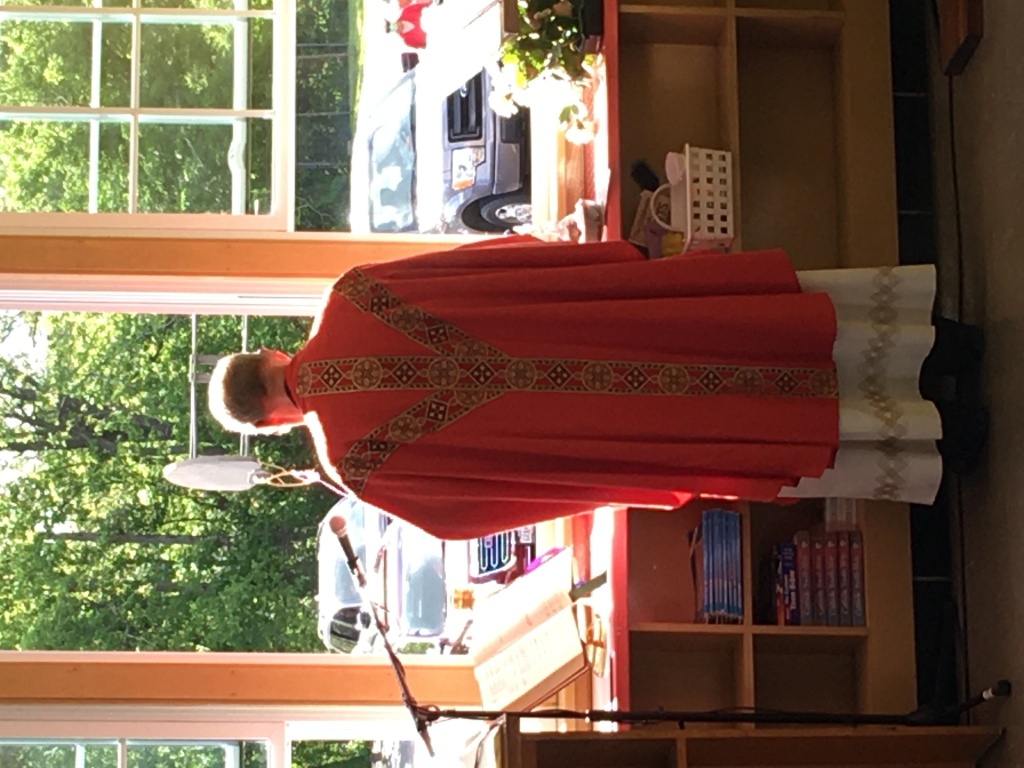 Monsignor Martin Heinz saying Mass from a classroom in the school to worshipers in the parking lot.